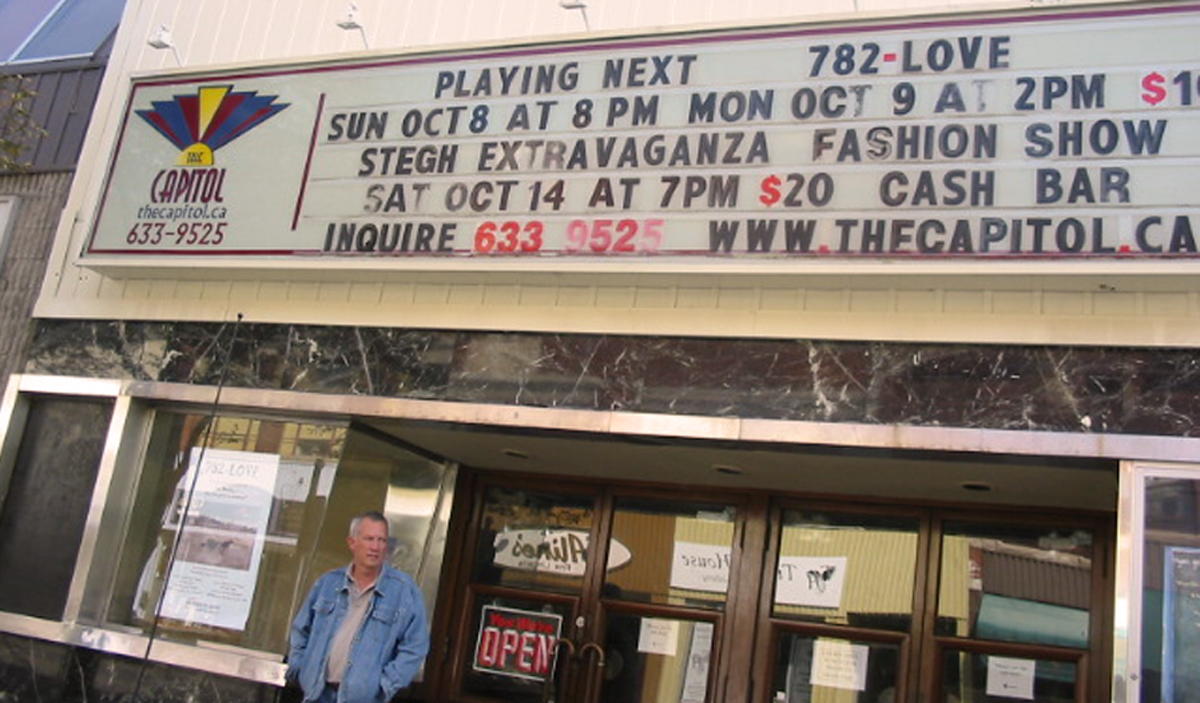 In the top photo, I’m outside the old movie theater in St Thomas, Ontario where my film, 782 LOVE is playing.  The film was all about trying to find love and romance in my hometown. It starred myself and some friends, two of which, Rob Faust and Kathy Stirrat also worked with me in a live theater version of some  scenes from my plays called 782-KISS   Above you can see the poster from that show.

Three of my plays can be found on this site, Toast, The World of Art, and my most recent, Flipper.

Contact me and I’ll mail you a script!  writeroffspring@gmail.com

Ben Long comes to Port Victoria to show a hick town what real journalism is all about.   He finds it filled to the brim with romance, politics and secrets.   But it doesn’t take long for him to become the most hated man in town, or to find that his sweetheart is engaged to another. Trish Talbot finds she must choose between a man who takes her for granted, and one who detests her family. The lesson Ben must learn is the difference between a wise guy and a smart ass.   2 acts, 4m 1f

“He is highly talented and has the unique ability to respond freely and emotionally to a work, while at the same time maintaining a critical distance. He has an outstanding commitment to his craft.”
-Rona Waddington, Artistic Director, St. Lawrence Shakespeare Festival.

Joan Byrd is perfectly safe with her playwright husband, Norm, in the comedy thriller 2 Byrds. But what of the renovations in the basement? Joan’s twin Andrea, arrives home, but her dog is nowhere to be found. Norm’s work is a little disturbing, and his buddy, Rod’s a little mysterious! But what is the big secret that Joan and Andrea share about their past? 2 acts, 3m 2f

Set in the basement of the Better Place Funeral Home, Diana Dymond, a washed up celebrity, has come to mourn the death of her sister, Annie. Who can resist her fading charms? Adam Mortimer, funeral director and son, Ezra, are both filled with grief, and guilt and are trying to make amends. Is there any escape from their past mistakes?   2 acts, 3m 2f

“Inherent in Patrick’s writing is a fresh sense of humour, original wit and a keen irony. His approach is unique and intelligent.” -Rona Waddington, Artistic Director, St. Lawrence Shakespeare Festival

“There is a joy and freshness in your approach to your work. You obviously adore your characters, have a clear idea of who they are and what they want. You also have a very detailed sense of their back story.”
-Iris Turcott, Dramaturge, Canstage, Toronto, Ontario.

What if George and Laura had met in high school? Can the president of the Library Club find true romance with a third string football player for the Americana Christian Crusaders? If George runs for Student Council president, will he finally be forgiven by Laura for what happened at the prom?  2 acts, 4m 1f

About George and Laura:

“We were pleased to read the script, which is sharply written and entertaining.”
-Graham Whybrow, Literary Manager, Royal Court Theatre, London, England

“This was an interesting experiment- you create a play in such an anarchic mood that your instincts to allegorise crash and burn up in the sheer energy of the piece…Of course, so many of the jokes are wonderful, and at times, they come from a love of the characters you’ve created.”
-David Lane, Literary Assistant, Soho Theatre and Writers’ Centre, London, England

Ma Hamilton, is God’s Little Angel with her hearing aid out, but Spawn of Satan when it is in. She has made a million on her only play, Cuddlewonderful.   Son Walt, is also looking for his big break. When fortune brings him a captive audience, he thinks this could be it! However, a TV game show, a parlour game of murders, and the Quaker ritual of bundling results in one dead body! 2 acts, 3m 3f

But that is just the beginning of what happened in Iraq, in the Rat Trap. The atrocities that were committed there will stay there. Tiffni and Chick won’t tell.   2 acts, 4 m 1f

Burnt out activist, Richard Brown and colourful companion, Red Rosa, have found their way to a resort town on the north shore of Lake Erie. During the Chicago Riots they formed part of the infamous “Gang of Four”.  Having melted into the background as a History teacher, Richard pines for the love he left behind. When friends arrive, Richard must choose. Will he leave anonymity, settle old scores or resume a love affair that he had thought over? 2 acts, 3m 2f

“It is an ambitious play with an interesting narrative structure. The characters are engaging and the dialogue is clever and crisp.”
-Iris Turcott, Dramaturge, Canstage, Toronto, Ontario

“Your knowledge of the time and place the play takes place is obvious and you convey the excitement and danger of these events quite well. The flashbacks to the speeches given at the marches are particularly
engaging.”-Joanna Falk, Literary Manager, Tarragon Theatre, Toronto, Ontario

It’s 1979, ten years after, and Richard, the JD Salinger of the Peace Movement, is visited by a couple of journalists who are hot to find the tell-all diary of Red Rosa, and to learn about the Weathermen. Richard and Rosa, are also visited by Jon Miller, his former comrade at arms. . So many lies, past and present, can only be revealed when a wedding occurs. 2 acts, 3m 2f

Why would Deb Bates put a photo of her husband, Allan’s penis on the cover of her new book, Supersized? She has made a discovery about Canadian men that will surprise you. But Allan is busy writing romance novels instead of finishing his thesis. Why is Deb’s brother is selling pirate satellite discs out of his coffee truck when he’s in a Witness Protection Program? Will the mob or the police get to the bottom of things first? 2 acts, 2m 2f

LARRY CURLY AND MO GET LUCKY

When the Children’s Aid Society removes their foster child, Mo and Hope’s marriage goes sideways, along with her restaurant and his ministry. When Hope leaves town, two down-on-their-luck transients, Larry and Sue, enter Mo’s life and become his new family. This dramatic comedy is inspired by the headline making case of two families in conflict with the Children’s Aid and a native band. Will there be happy ending? 2 acts, 2m 3f

When John’s daughter, Minnie, gets engaged to  sleazy baseball team owner, Lee Rath, John must act fast. What results is a new religion, a game of strip scrabble with John’s wife, Grace, and a visit from  journalist Max. Meanwhile Lee plans to move the Moose to Mexico. These characters all collide during a strange and wonderful Thanksgiving where everything hinges on the turkey! 2 acts, 2 m3f

TANGO-BANGO: A SHORT DANCE INTO THE FUTURE

The plague is ravaging America and a State of Emergency has been declared. Mobs and patrols enforce a Cleric’s edicts locally, and send those on the List to Interrogation Centres. Win, a dance instructor who owns a cruise business,  ferries refugees to safety, bargains with his ex-wife for her affections, and tries to make a deal with the patrol when they turn up. Who will Win deliver up for safe passage? Between the sizzling dance sequences, all will be revealed!   2 acts, 3f, 3m

About Tango-Bango:
“This is an engaging and accomplished play, which effectively counterpoints the style and action with the content of the play to create an interesting satirical tone.”- Rachel Taylor, Literary Assistant, Soho Theatre and Writers’ Centre, London, England