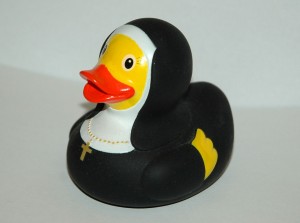 Who were the  Quackers? Well, from the native perspective, the Quackers were illegal immigrants from England, poor duck farmers  named for the way they called to their fowl in preparation for collecting their eggs and occasionally milking them. They helped William Penn’s Quakers establish Pennsylvania, which they insisted on calling “Quackervania.”

On the voyage to America, the Quackers were too poor to mix with the Quakers in first class. This reinforced a long-standing inferiority complex, transforming them into nitpickers and busy bodies when they arrived to these shores. Quackers would always be the first to notice if the natives weren’t displaying the flag properly or if they were using mailboxes not approved by the Postmaster General.

While Penn’s Quakers were creating the basis of the American Constitution in Pennsylvania, including religious tolerance and freedoms unknown elsewhere, the Quackers were religious fanatics. Their God was the God of the Old Testament.

All a Quacker needed to straighten up and fly right was The Ten Commandments, carved inside their outhouses so that they could contemplate them on a hopefully regular basis. Why Jesus had to turn up was a big mystery to them. They were more into “Judge your neighbor” than “Love your neighbor”.

On Halloween, instead of tipping over a Quacker outhouse, a favorite trick of the Quakers was to enter and chisel out the “not” in the Seventh Commandment. Quackers were such literalists that they would follow the new version religiously, until some nitpicker, checking on the maintenance of the outhouse, discovered the omission. Talk about mixed feelings!

While the Quakers were clean shaven, the Quackers grew beards. Even the women. The Quakers deplored slavery, but in Quackadelphia the Quackers had their plantation slaves carve mallard decoys in their drive to found a Duck Dynasty.

Slaves also pursued these fowl around muddy barnyards to pluck their feathers for pillows, becoming the first in American history to get down and dirty. The fortunes they made allowed their owners to travel extensively and to stay at the best hotels. They became known as the Ritz Quackers.

Meanwhile the Quakers were getting rich in their own way. The jealous Quackers nitpicked that the face on the Quaker Oatmeal package did not much resemble William Penn. But that criticism rolled off the Quakers like water off a duck’s back. That really ruffled Quacker feathers. Infuriated, they produced a breakfast staple of their own, interrogating their African-American cook to give up her special recipe until she finally quacked. The result was Aunt Jemima’s pancakes.

Quackers are still around now, although they aren’t called that anymore and they attend a variety of churches. Like puns, they are best experienced in small doses. So why would we need Quackers? Well, we all could use the odd busybody and nitpicker. Don’t we have a tendency to slack off and to let things go? If you don’t believe us, install a full-length mirror. And where does this tolerant “live and let live” get us anyway?

But William Penn truly despised the Quackers. He was no nitpicker. In fact he seldom read the many documents that were brought to him to sign. He even signed off on his rebellious daughter’s request to be married, without checking the details. Sadly this led to shock-induced heart attack and his subsequent death on the morning of the wedding when he asked his wife what kind of man his daughter was determined to marry.

“Polly wants a Quacker” she replied.